Greeting as a new chairperson at this year general meeting

I am Junko Kobayashi, who was recently elected as the 4th chairperson of the Japan Toilet Association (JTA). I served 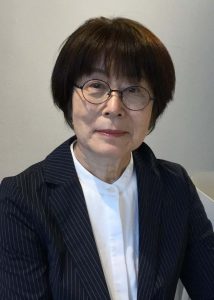 as Vice Chairperson and Steering Committee member for many years under the former Chairperson, E-Prof. Shiohiko Takahashi. This year is the 35th anniversary of JTA. It can be said we have been leading to improve the filthy Japanese public toilets which was once called 4K (Kurai, Kowai, Kitanai, Kusai in Japanese) meaning “Dark, Scary, Filthy, Smelly” respectively.

What is interesting here in JTA is the interaction with such a wide variety of members. For example, I am an architectural designer, and when a problem occurred, it is possible to discuss deeply with many people in a wide range of fields. This is much better to make solution through considering only a single field. Then I have learned that it is much productive to follow the users’ requirements. I have also recognized that the problem of toilets has no borders, and the current problem solutions can be applied to other countries issues. The opportunities to meet many people in JTA have greatly improved my work scope and thinking.

The JTA will be able to offer a wide range of proposals with qualified and intelligent human resources of the members. Then JTA will contribute to society by these powers.

This year, I would like to propose to do exchange actively among members. Therefore, it is effective to create a place where people of various fields can actively discuss. Then I would like to do hearing about “What is the newly required public toilet under  COVID-19 infection” from each member’s standpoint. While it is difficult to meet directly, we would like to take the advantage of the Web which can easily connect from anywhere, I would like to encourage the meeting with many people.

There are four practices which will lead to this year’s aspirations.

The first is to continue the power of the association that the former chairperson has accumulated.

The second is to stimulate the interaction between members.

The third is to activate of the association

The fourth is to create the basis for the international exchange